Krispy Kreme: Talk like a Pirate Day on 9/19- Get a Free Dougnut or a Free Dozen! 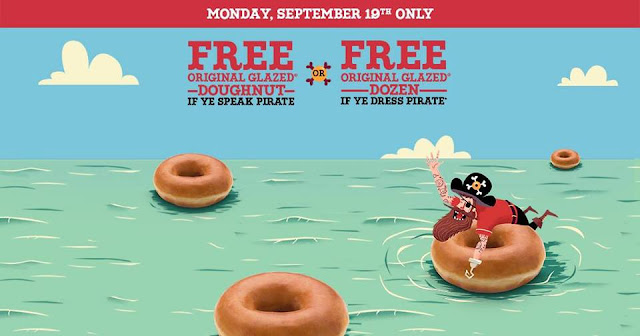 Krispy Kreme is once again celebrating "Talk like a Pirate Day" on 9/19! Go HERE for more info.

Say ‘ahoy’ to your free Original Glazed doughnut! Krispy Kreme Doughnuts will celebrate Talk Like a Pirate Day on Sept. 19.

For the first time this year, guests can also use a custom Krispy Kreme Snapchat pirate filter to digitally ‘dress’ like a pirate. Any guest who shows their Snapchat image at a participating shop will qualify for a dozen Original Glazed doughnuts. Show your snap to a team member inside the shop and score ye bounty. Arrrr....

Qualifying pirate costumes must include three pirate items, such as an eye patch or bandana. No purchase is necessary to take part in Talk Like a Pirate Day.
Posted by Meghan at 1:30:00 PM