Possible FREE Chipotle with text if you catch the word "FREE" during Men's Basketball game on Sunday! 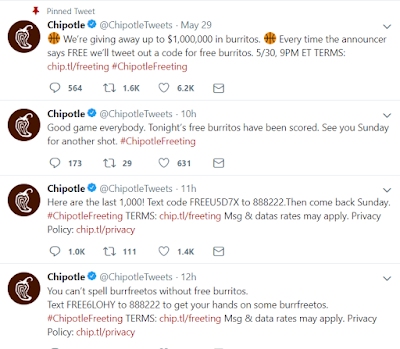 If you plan to watch the 2019 men’s professional basketball championship games, keep your ears open and you may win some FREE Chipotle!


If you qualify, you'll a message containing a unique redemption code. Each redemption code can then be redeemed for one free regular menu entrée item at participating Chipotle restaurants in the United States. All codes will expire on July 14, 2019 and must be presented on a mobile device to redeem. Codes cannot be combined with other offers.
Posted by Meghan at 10:20:00 AM